Last month in this report we talked about two pleasant surprises on the volume side, which leaves us talking about a drop-off this month in HECM volume – albeit in the less hopeful of our two surprises. July saw HECM endorsements drop to 3,868 loans, down -25.4% from last month’s increased tally. The decline is primarily due to Metlife’s expected reduction due to their exit, accounting for 76% of the industry’s drop.

Since we’ve now seen three major lenders exit, we looked at the volumes trends of each around their exit announcement to see if Metlife’s pattern is out of the ordinary. The first chart below shows raw volumes for each:

July was the third monthly volume figure we’ve seen since Metlife’s exit announcement in April. We can see that Wells Fargo was bigger than both Metlife and BofA, but also continued to generate significant volume for 1 month beyond the other two lenders.

This second chart simply adjusts each lender’s volume in comparison to their exit month. This is where we see the resemblance continue between Metlife and Bofa, but also see how unusual the 37% spike in Metlife’s June volume was. Given the faster decline in July, it would seem that Metlife pulled forward endorsements and we’re likely to see no significant endorsement volume from the company in August or beyond.

The more important question here is how many case numbers were issued in June and July, but we still haven’t seen a number from HUD as of this writing. If last month’s growth can be sustained or even equaled, the worries about low endorsement totals would be significantly lessened.

Believe it or not there were two top 10 lenders that increased endorsement totals in July:

Please click the image below for the full report. 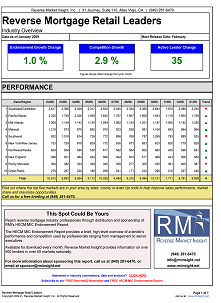